Brite Solar Glass became the winner of the Step Change pitching competition with NEXT Energy and LightGlass coming second and third. All three happen to address their solutions to the glass efficiency issues, developing intelligent glass for the intelligent world of tomorrow.

After a brisk and energetic pitching session, the winner of the very first Step Change program has been selected by the jury on Thursday, June 29. The Step Change program is one of the novelties introduced by GPD 2017 aiming to move the glass industry forward by bringing in startup companies, new technologies and innovative ideas.

On the second day of the conference, 22 companies coming from different parts of the world shared the stage to give a 3-minute pitching presentation and convince the jury of the viability of their business idea. The diversity of the lineup was impressive. From integrated electronic solutions, to AR and VR, to advanced coatings and cutting technologies – the unfolded spectrum proved that there are a lot of undiscovered opportunities for glass. 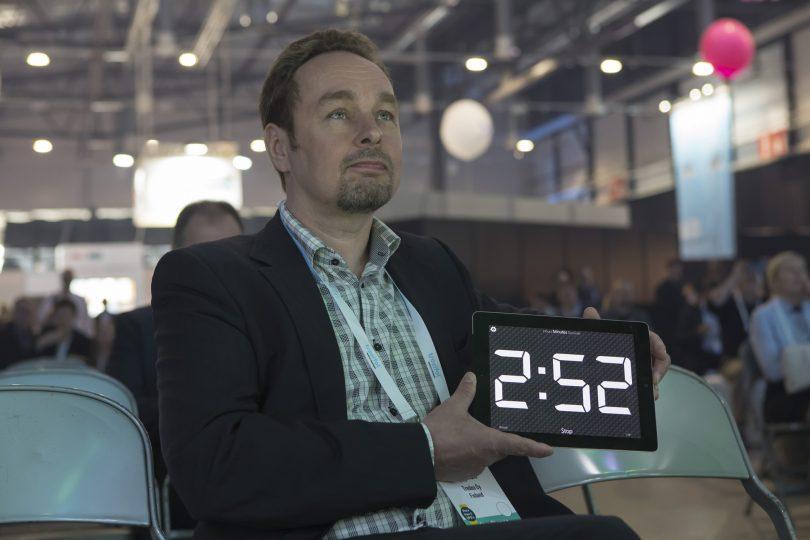 Brite Solar Glass was selected to be the winner of the pitching competition. Founded in 2009 in Thermi, Greece, the company develops transparent solar cells for usage as power-producing glass for greenhouses, homes and office buildings. The solution promises to reduce the energy footprint and at the same time produce electrical energy from light – all at very competitive cost.

Rick Orlando, VP Business Development of Brite Solar Glass, shared his impressions from the competition: “Wining the competition means exposure to us. The Step Change program gives visibility to companies, which they otherwise wouldn’t have. And that’s the best thing – trying to get the message out to as many people as possible and find partners.”

“I think the main reason why we won the competition is because we are addressing the issue critical to people. The technology existed for years, but it has been too pricey and never realized. But now we can do that,” Rick adds.

The other two companies honored by the jury are NEXT Energy from Santa-Barbara, CA and Vienna-based LightGlass Technology.

NEXT Energy, a company developing energy-producing windows, became the third winner.  “We were waiting for GPD for years, so now we are excited to finally be here,” says Corey Hoven, CTO of the company. Corey is very proud for NEXT to be one of the winners. “This competition gave us a chance to show off. However, I think that more important than the competition itself is the general Step Change attitude present at this event. It’s all about communication and people building the culture of the entire industry,” he says.

Felix Zabel, Board Member of LightGlass, comments: “Being named among the winners of the Step Change competition is a big honor for us. It is also a statement that we are moving in the right direction, but the glass industry is moving into the better future. Besides, thanks to GPD, we are bringing home a lot of new contacts and great ideas for our future development.” With its smart glass product with integrated ALED technology that provides artificial lighting in daylight quality, LightGlass has won many awards already.

Step Change 2017 is one small but very important ‘step’ for all the program participants in the way of their business development – and a big initiative to foster positive ‘change’ for the entire industry.
The high level of appreciation of the program received from the GPD’s participants gives a confidence that this new endeavor is here to stay and bring even more companies and ideas for the years to come.

About Brite Solar Glass
Since 2009, Brite Solar develops affordable and efficient technology for solar glass suitable for usage in greenhouses and building windows.

About NEXT Energy
Founded in 2010 in Santa-Barbara, California, NEXT develops transparent energy-harvesting window technology that allows architect and building owners to transform windows and glass facades into producers of low-cost, onsite, renewable energy for buildings.

About LightGlass Technology
Based in Vienna, Austria, LightGlass develops and licenses self-luminous glass in daylight quality as well as glass with integrated technical modules for the international industry.